Each year, from 2013 until Coralville's 150th birthday in 2023, Coralville unveils a special limited edition, individually-numbered commemorative button. The annual button highlights a location, event, or person significant to Coralville's history. 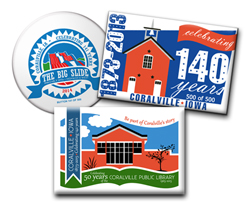 About the Button Collection

About the button artwork: The Coralville Strip on Highway 6 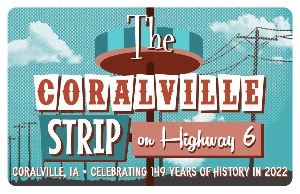 Sometime after 1950, the stretch of U.S. Highway 6 through Coralville became known as "The Strip." It developed into a major thoroughfare for travelers as automobile travel and tourism increased, and became well-populated with motels, restaurants, service stations, and businesses. "The Strip" had a considerable impact on Coralville's growth, and remains an important part of Coralville today.

With mid-century style graphics, the logo is a nod to the early years of The Strip. The sign mimics the sign of the Carousel Inn and Restaurant -- which was previously another local landmark, Loghry's Drive-In and Cafe -- at the corner of 1st Avenue and Highway 6. The Strip was known for the mixture of business signs that popped up along Highway 6 against a backdrop of utility poles along the roadway.

Coralville history: An example of a Coralville business on Highway 6
For long-running and current businesses, Harry’s Custom Trophies has been in Coralville, and always located on Highway 6, since 1957. The Manary family has owned and operated it since 1971, marking over 50 years of family ownership.

Here is the history, according to the current owners, Kevin and Rick Manary:

Congratulations to the Manary family for their contributions to Coralville. Harry's Custom Trophies has served the City of Coralville throughout the years for our signage, trophy, and plaque needs. 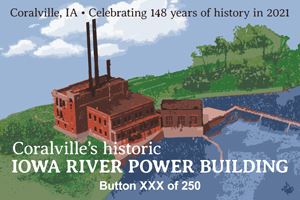 The historic Iowa River Power Building is located along the Iowa River at 1st Avenue and 5th Street.

In 1886, the Iowa City Electric Light Company was established and permanently installed in Coralville. The plant was rebuilt in 1894, destroyed by fire in 1899, and rebuilt.

In 1904, the company had lighting and power service in the Iowa City business district, and no more than a dozen residence customers. In 1909, the franchise for installation of lighting for Coralville was obtained by the Iowa City Electric Light Company.

In 1912, the name was changed to Iowa City Light and Power Company.

In 1934, natural gas was piped to boilers at the Coralville plant and to Coralville and University Heights, and in 1936 Iowa City received natural gas.

The name was changed to Iowa-Illinois Gas and Electric Company in 1940. 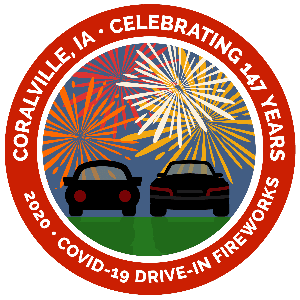 About the 2020 Buttons: Drive-In Fireworks

In 2020, traditional 4thFest activities were cancelled due to the COVID-19 pandemic, but the fireworks went on! Drive-in fireworks were held at the Coralville Youth Sports Park, allowing households to spread out. The fireworks were also livestreamed for those who preferred to watch from the comfort of home.